Chatterbox Digital Marketing is proud to be located in Flint, Michigan and has a heart for a city that was once considered all hope was lost. Flint has survived many crisis and continues to fight back by the people that love it and call it home. 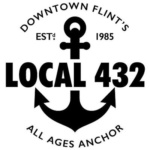 In the heart of Flint there is a safe place for people of all ages called the Flint Local 432. Flint Local 432 is one of the longest-running all-ages music and arts venues in the country, having hosted thousands of bands since its start over three decades ago. It is a program of Red Ink Flint, a youth focused non-profit that provides access to the arts and other activities in downtown Flint.

Chatterbox Digital Marketing donates to help support the Flint Local 432 in it’s effort to provide a place for Flint’s youth.

It was founded to provide a venue for local bands to play, and that remains the primary focus. All-ages venues are important because young people are continually excluded from participating in music due to age restrictions. In the years since it formed it has gone from being mostly a punk rock club to one that books a wide variety of musical styles; punk, indy, rock, metal, hip hop, Americana and more. In addition it also programs other artistic disciplines, including theater, film, dance, spoken word and puppetry.

From the start it has worked to bring regional and national bands to its stage. It’s history reads like a roster of underground music since the 80s; ALL, Fugazi, Superchunk, Suicide Machines, Mustard Plug, Less Than Jake, My Chemical Romance, Coheed & Cambria, Avenged Sevenfold, Koji, Bear vs. Shark, The World Is A Beautiful Place…,

All of that said, it is the most proud of being there to help at the beginning of the careers of local bands who successfully transition to national touring acts, like Chiodos, The Swellers, and Empire! Empire! (I Was A Lonely Estate).